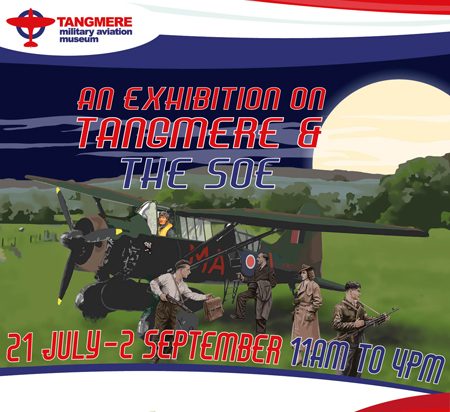 The exhibition will be held in the Museum’s Neville Duke Hall and will open daily from 1100 until 1600 hours. Entry to the exhibition is included in the normal Museum.

We will be including the following in the exhibition:-

•The SOE careers of women agents who flew from RAF Tangmere
•Information on lesser known but important RAF Special Duties (SD) Pick-Up pilots who flew Westland Lysanders from Tangmere
•A film on the recruitment and training of SOE agents
•The Comète Belgian and French Resistance escape line
•A series of talks on Tangmere and the SOE during the exhibition
•Demonstrations on certain days on how SOE agents carried out sabotage to “Set Europe Ablaze” (Churchill’s mission for the SOE
•In the Museum’s Middle Hall, a new exhibition on Wing Commander Leonard Ratcliff, a famous No 161 Squadron Special Duties pilot
•Code writing and other activities for children

Come and see the Museum’s latest acquisition, a full size replica of a Special Duties Westland Lysander aircraft as used by No 161 Squadron during the Second World War to transport agents and French Resistance members from RAF Tangmere on moonlight nights to and from fields in France.

Also, on Saturday 28 July at 1515, in association with the Chichester Cinema at New Park, the cinema is showing the film ‘Carve Her Name With Pride’ about the life of Violette Szabo, a famous SOE agent. At this event the Museum’s Director, Dudley Hooley will also give a short talk on Tangmere’s Lysander Pick-Up pilots.

New Films for the Museum’s Battle of Britain Exhibition

Pete Pitman, the Museum’s Head of Simulators and Projects, has recently made, with David Coxon…

Subject to any UK Government restrictions in force at the time, the Museum will reopen…