On 2 April 1982, Argentina carried out its threat to invade the Falkland Islands and quickly overcame the small British garrison. The next day, Britain’s Prime Minister, Margaret Thatcher, announced the formation of a naval task group to regain the islands. The group included two aircraft carriers; HM Ships Hermes and Invincible with 20 of the untested Sea Harrier V/STOL jet fighters. They would be facing approximately 130 Argentine aircraft including supersonic Mirage jet fighters of the Argentine Air Force and the recently acquired Exocet missile armed Super Étendards of the Argentine Navy.

A temporary exhibition will be held at the Museum from 2 April until 31 August to mark the 40th anniversary of this war focusing on the air element of the conflict with information on Sea Harrier and RAF Harrier GR3 operations from the carriers and the Vulcan bombing raids from Ascension Island. The exhibition will also cover the important inflight refuelling role RAF Victor tankers made during the war, the support provided by Hercules aircraft, the RAF’s main transport workhorse and of one of the task force helicopters – Chinook ‘BN’.

Wars are won by people and the exhibition features one of the Sea Harrier pilots who gained a bravery award ‘in the field’ but who sadly did not return and one of the RAF squadron commanders who later became Chief of the Air Staff.

During the exhibition it is planned to hold a ‘Falklands Day’ on Sunday 1 May when aircrew who were involved in the war will be invited to come and share their experiences with us and to see the Museum’s latest aircraft acquisition, Sea Harrier XZ459, that as an FRS 1 flew 53 sorties during the war with No 800 NAS flying from HMS Hermes.

Official Opening of the Exhibition

On Saturday 2 April the Museum’s ‘Falklands’ Air War 40’ was officially opened, 40 years to the day when Argentina invaded the islands, a British overseas territory. The Museum was delighted that Commander Robin Kent, Royal Navy accepted our invitation to open the exhibition. Robin, a Sea Harrier pilot in 1982, was the Senior Pilot of No 801 Naval Air Squadron embarked in HMS Invincible, one of the aircraft carriers in the Task Force and was Mentioned in Dispatches during the conflict.

When it left Portsmouth on 5 April, the Task Force had 20 Sea Harriers and 28 pilots. In his opening speech Robin referred to a message sent to the Sea Harrier pilots as they departed for the South Atlantic from Wing Commander Peter Parrott, one of the Battle of Britain pilots who served at RAF Tangmere in 1940 (No 145 Squadron).

The message read “From one of the Few to the Very Few – good luck and good hunting”.

Below are some of the ‘Very Few’ – the Sea Harrier pilots of No 801 Naval Air Squadron (HMS Invincible). 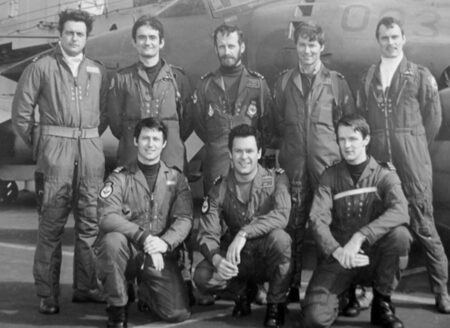