By the spring of 1941 the leadership of both Fighter Command and No 11 Group (responsible for the defence of south east England) had changed. Sir Hugh Dowding, thought at the time to be exhausted and too defensively minded was replaced by a more charismatic and confident figure – William Sholto Douglas. Keith Park, AOC No 11 Group during the Battle of Britain was replaced by Trafford Leigh-Mallory who had been AOC No 12 Group during the Battle. Throughout 1940 both men had had their differences regarding the tactics to be used; Park favoured reserving his forces until they had to be committed and Leigh-Mallory, having been convinced by a Duxford acting Squadron Leader, Douglas Bader, favoured the ‘Big Wing’ concept. In this a Wing of at least three squadrons would form up and attack the German formations in numbers. The results, when this was achieved, were mixed and Park claimed that this focus by 12 Group on forming Wings resulted at times in a lack of support for his hard pressed squadrons in No 11 Group. With these changes a new policy was set out by the leadership – ‘leaning into France’, meaning Fighter Command changing to offensive sweeps over France. Such sweeps commenced in late 1940 with small numbers of fighters (up to four aircraft) crossing the Channel, with the aim of enticing the Luftwaffe fighters up to fight. In order to carry out these missions (known as ‘Rhubarbs’) the raiding aircraft required low cloud cover protection (less than 2,000 feet cloud cover). Unfortunately, as an operation, the Rhubarb was unsuccessful – the enemy were not enticed up to fight; the raids being mainly ignored by the Luftwaffe. Rhubarbs were costly too with many experienced pilots lost due to operating single engined aircraft over the Channel in very poor weather conditions.

In January 1941 a new operation was introduced to entice the Luftwaffe to battle. Fighter sweeps were now conducted by five squadrons flying as a Wing. Unfortunately, the Luftwaffe again refused to take the bait and stayed on the ground. It was then decided that a small force of light bombers, usually Blenheims of No 2 Group, Bomber Command, should be added to the raiding force. These operations, known as ‘Circuses’ did begin to attract enemy fighter opposition because they were mounted against specific strategic and military targets such as railway marshalling yards, power stations and enemy airfields. On 18 March 1941 Wing Commander Douglas Bader arrived at RAF Tangmere as Wing Commander (Flying), a new post in Fighter Command. The Tangmere Wing consisted of No 145 Squadron (Sqn Ldr Jack Leather) and No 616 Squadron (Sqn Ldr H F ‘Billy’ Burton) based at Tangmere and No 610 (Sqn Ldr John Ellis) based at Tangmere’s satellite aerodrome Westhampnett. All three squadrons were equipped with Spitfire IIAs and Bs. With the improving spring weather and to protect the squadrons from night bombing raids on RAF Tangmere, No 145 Squadron was moved a mile south to the newly opened Merston satellite aerodrome. No 616 Squadron also moved away from Tangmere to Westampnett to join No 610. In the middle of April, Sqn Ldr Paddy Woodhouse took over No 610 from John Ellis and Sqn Ldr Stan Turner, a Canadian who had fought with Bader in No 242 Squadron in the Battle of Britain at Coltishall and Duxford, took over No 145 Squadron. Also in April, Group Captain A B ‘Woody’ Woodhall arrived at Tangmere as Station Commander and Chief Controller, a post he had held at Duxford when Bader was there. Woodhall was known for inspiring confidence in the squadrons he was controlling with his unhurried and confident manner on the radio and for allowing the leader in the air to make his own decisions after giving him the necessary information. In managing the Wing it is interesting to note that Bader, as he had done at Duxford during the Battle of Britain, elected to fly mainly with only one of the Wing’s squadrons, No 616. In his section within the squadron he flew with two pilots who made their name later in the war; Flying Officer ‘Cocky’ Dundas and Pilot Officer ‘Johnnie’ Johnson. Dundas later became the RAF’s youngest Group Captain and Johnson the RAF’s highest scoring fighter pilot. 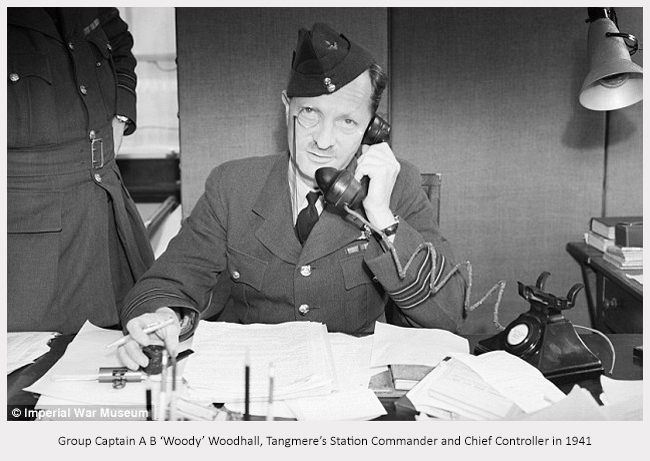 In early June 1941 Ken Holden, a flight commander in No 616 Squadron, was promoted Squadron Leader and took over No 610 Squadron – Bader’s team for the summer’s operations was complete. It was about this time, in early summer, a notice appeared on 616’s ‘A’ Flight notice board – ‘Bader’s Bus Company – daily tickets to the Continent – Return tickets only!’ ‘Bus Company’ may have had something to do with the Wing’s radio call sign, ‘Green Line Bus’.

Bader, on taking over the Wing, ordered that all squadron operations within the Wing should be flown in ‘Finger Four’, a formation in which sections of four aircraft flew in two pairs of two which, when viewed from above, resembled the fingertips of an outstretched hand, allowing them to cover each other. ‘Circuses’ were planned at Fighter Command level. In a Circus the bombers were escorted by Wings of fighter aircraft providing high and close cover – the formation being known as a ‘Beehive’. Other Wings would be tasked by Fighter Command to provide ‘top cover’ for the Beehive, target support whilst the Beehive was over the target area and withdrawal support as the Beehive left the target. When covering a Circus, the Tangmere Wing would normally operate with the three squadrons flying at different levels and depending on the time of day the Wing would cross the French coast at a point where it was best advantaged with regards to the sun. In a morning operation the Wing would aim to cross in both directions near the French town of Gravelines and in the afternoon near the port of Boulogne. By June 1941 the Circuses, usually conducted twice a day, were well under way. A typical day for the Wing was 25 June 1941 when it covered Circus 22 between noon and 1300 hours. On crossing the French coast contact was made with thirty plus Bf 109s near Gravelines. In the ensuing battle No 610 Squadron claimed one Bf 109 destroyed and one a probable. Bader, flying with No 616 Squadron, claimed one Bf 109 destroyed and one shared with his No 2, Sergeant Jeff West. Other claims by No 616 Squadron were two enemy aircraft as probables and two damaged. On the evening of the same day the Tangmere Wing flew cover for Circus 23. About fifteen miles inland from the French coast, Bader was warned of twelve Bf 109s approaching from the east. No 610 Squadron claimed two enemy aircraft destroyed and two damaged. No 145 Squadron claimed two enemy aircraft destroyed and two damaged, one of which had been attacked by their Squadron Leader, Stan Turner. No 616 Squadron was not so lucky on this operation with two Sergeant Pilots shot down and killed. Another Sergeant Pilot was lucky to reach Hawkinge after his Spitfire had been severely damaged when jumped by two Bf 109s. Bader attacked a group of four Bf 109s with his No 2 in the Boulogne area and managed to destroy one of the enemy fighters. 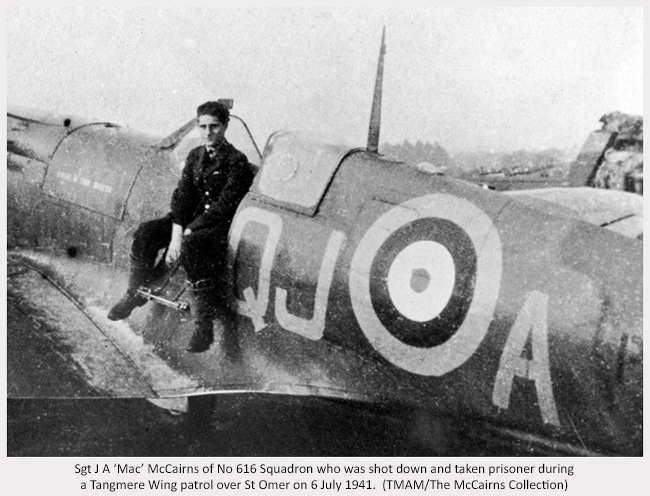 During July and early August the Circus operations continued and Tangmere Wing’s Spitfire IIs were replaced with cannon armed Spitfire Vs with their more powerful Merlin 45 engines. However, Bader, not believing in the value of a cannon, usually flew a Mk VA machine gun armed aircraft. On 28 July there was a major change to Bader’s team – No 145 Squadron was replaced by another experienced squadron, No 41, led by Sqn Ldr Donald Finlay. Four days later Finlay was promoted to acting Wing Commander and Sqn Ldr ‘Elmer’ Gaunce, a Canadian, took over the squadron. On 9 August 1941 the Tangmere Wing was tasked with providing target support for Circus 68, a bombing raid on Gosnay, near St Omer, northern France. Bader took off as normal with No 616 Squadron, but with Sgt Jeff West as his No 2, his normal No 2, Sgt Alan Smith, being unavailable. As Nos 616 and No 610 Squadrons set course, No 41 failed to join up. As the two squadrons crossed the French coast Bf 109s were seen to port and below. No 616 Squadron attacked, covered by No 610 above, but were bounced by other Bf 109s before No 610 could intervene. In the ensuing close engagements, (Johnson said later, that it was on that day he came closest to having a mid-air collision), Flight Lieutenant ‘Buck’ Casson, 616’s ‘B’ Flight Commander, was shot down and Wing Commander Bader downed. Exactly what happened to Bader remains a mystery to this day. Bader maintained that he had a mid air collision with a Bf 109. The Luftwaffe’s JG 26’s Kommodore, Oberst Adolf Galland, maintained that Bader had been shot down by one of his pilots. Bader never accepted this theory. Another possibility is that Bader was shot down by ‘friendly fire’ from one of his Wing’s Spitfires in the chaotic aerial battle that day. Bader, after a struggle to get out of his cockpit and leaving one of his metal legs behind, was able to parachute to safety to land near St Omer. ‘Buck’ Casson also survived after crash landing near Marquise, just short of the French coast.

On 14 August the German Authorities notified the British via the Red Cross that Bader was a prisoner. Group Captain Woodhall broadcast the welcome news over the Tangmere station tannoy. The Germans also offered free passage for an RAF aircraft to deliver a spare leg for Bader to Galland’s JG26 airfield at Audembert. The British did not take up this offer but dropped a spare leg by parachute from a Blenheim on 19 August during a Circus operation to Longuenesse. The first operation conducted by the Tangmere Wing after losing Bader was led by Wing Commander Don Finlay but he was replaced by Paddy Woodhouse on 14 August. Woodhouse had commanded No 610 Squadron earlier that summer, between April and June. On 29 August Holden’s No 610 Squadron left Westhampnett for Leconfield, being replaced by No 129 Squadron. On 6 October, Billy Burton’s No 616 Squadron left to be replaced by No 65 Squadron. ‘Bader’s Bus Company’ was no more!

Subject to any UK Government restrictions in force at the time, the Museum will reopen…